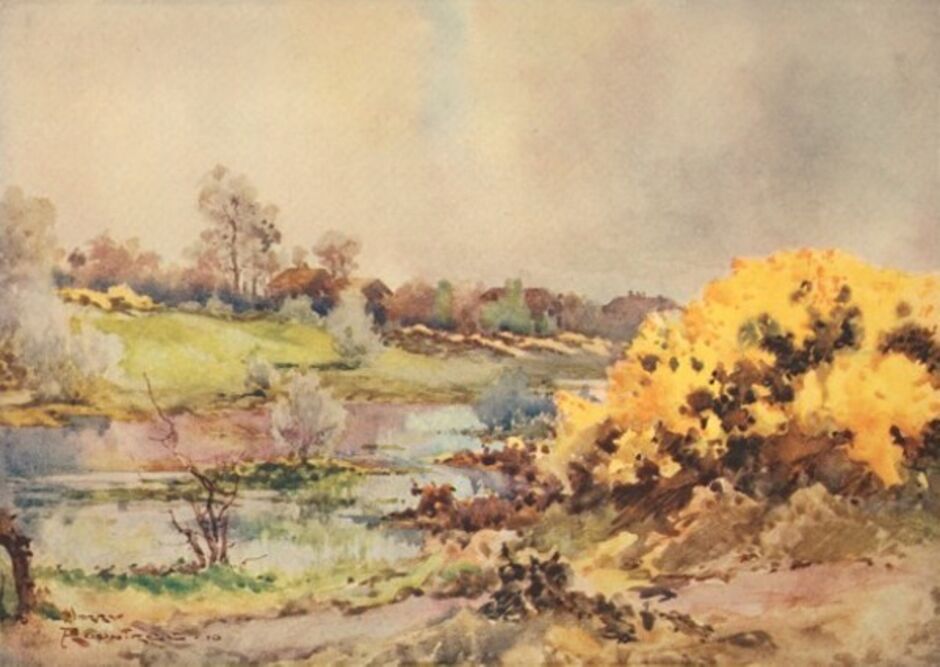 Over one of the revolutionary things done at Woking controversy still rages, or rather it no longer continuously rages, but spirts every now and again into flame. This is the famous bunker at the fourth hole, of which the traveller may get a fine view as he is being whirled towards Southampton by the South-Western Railway. This hole was originally a very ordinary ‘drive and a pitch’ hole. You drove straight down a fairly broad strip of turf between heather on the left and the railway line on the right. Then you jumped over a rampart on to a nice big green and there you were. The soul of Mr. Stuart Paton, however, soared far above so lamentably unimaginative a hole, and he set to work upon it. First he removed large portions of the cross-rampart, so that it became possible to play a running instead of a pitching shot from certain positions, and then in the very centre of the fairway, at just the range of a good drive from the tee, he dug a small but formidable bunker. In shape it bore a resemblance to the Principal’s Nose, while in position it was rather like that of the bunker which lies in the middle of the course going to the ninth hole also at St. Andrews. By means of this bunker a clear-cut and distinct problem has to be faced on the tee. We must decide whether to drive safely away to the left, and so have a pitch to play, which is sometimes rather difficult, or whether to take a risk and lay down the ball between the bunker and the railway line. The danger of pushing the ball out a little too much, and so going out of bounds, is considerable, but the reward is considerable also, for an easy running up shot should give us a putt for three.

The number of discussions which I have heard as to this one little bunker would fill a large but not an interesting volume. The form of the discussion is nearly always the same, and is something like this:

A. “You can’t persuade me that it is right to have a bunker bang on the line to the hole, exactly where a good drive should be.”

B. “If there is a bunker there, then that cannot be the line to the hole. Your drive was not a very good one, but a very bad one.”

A. “It was not a bad one. It was a perfect shot—hit in the very middle of the club.”

B. “You should use your own head as well as the club head.”

After this the conversation becomes unfit for publication.

There are also some bunkers situated actually in the putting greens which used to cause annoyance. There is one at the sixth and two at the seventeenth, one of which is affectionately called “Johnny Low,” after that sternest of bunker-makers, who invented it. To these, however, everybody has long been reconciled, and both holes afford good instances of how much can be done in the way of making a player place his tee-shot, by digging a comparatively small bunker in the green.

Another clever and interesting piece of golfing architecture is to be found at the seventh hole. The hole can be reached from the tee with a moderate iron shot, and in former days, so long as one did not slice or pull very egregiously, one could recover from a most indifferent shot by laying a long putt dead on a flat easy green. Now, however, a most ingenious range of mountains has been introduced, which has had the effect of dividing the green into two compartments. If a shot be at all crooked a three is still well within the bounds of possibility, but the approach putt, instead of being easy, has to be made over a series of most perplexing curves. The straight player’s ball, on the other hand, is lying close to the hole, for the hills, which are the enemies of the crooked, are as a rule the allies of the accurate, and have rewarded his virtuous ball with a kick from their friendly slopes. A somewhat similar architectural feat has been tried at the other short hole—the sixteenth, where we have to pitch over a pond—but there, for some reason, it hardly seems to have been so successful.

I am afraid I may have given the idea that Woking has been laid out in a spirit of impish mischief, but such an impression would be an entirely wrong one. There are plenty of opportunities for fine, straightforward hitting, although wild, erratic slogging will nearly always be punished. There are some really beautiful two-shot holes, which are at their best when there is not too much run in the ground. The fifth, for instance, where there is a wonderfully pretty green lying in a semi-circle of trees, and the eighth, a really gorgeous hole when there is any wind against one. Twelve and thirteen again, though not quite so long, are both beautiful holes, and the fourteenth, which brings the golfer right up to the club-house and tempts him to lunch before his time, requires two of the very longest and straightest of hits.

Taking them day in and day out I think the greens at Woking are the best that I know to be found inland—Mid-Surrey excepted. They are often very nearly perfect, and are practically always good. They are not as a rule alarmingly fast, nor so slow as to convert putting into mere hard physical exercise, but of a nice, easy, comfortable pace, that reflects enormous credit on Martin, who is one of the best of green-keepers. I can only end as I began by asserting that there is no more delightful course whereon to play golf.